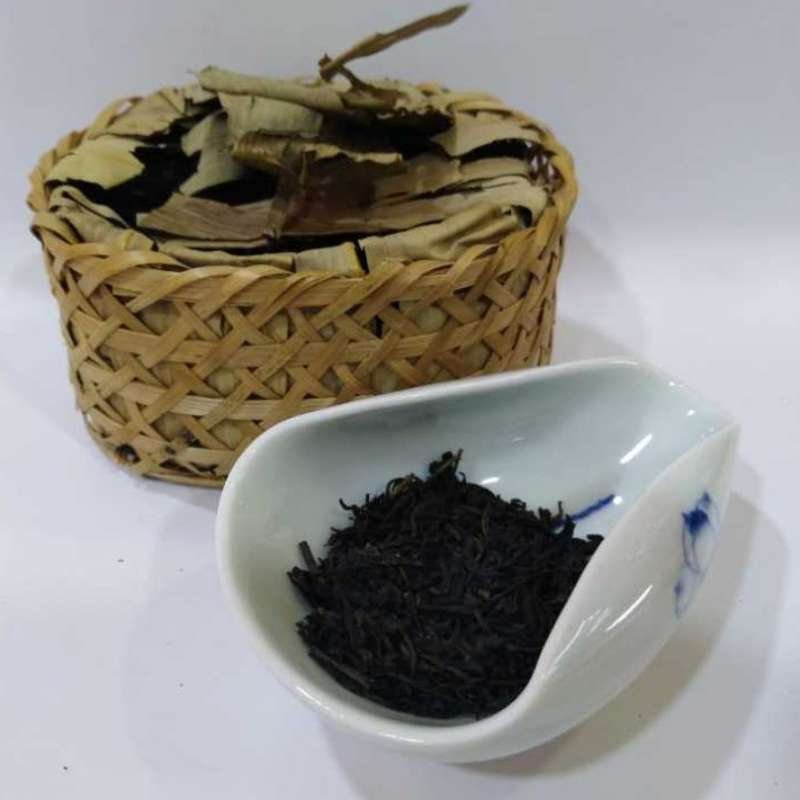 Liu-an tea is from Anhui province. Liu-an tea was originated from ancient China, in Song Dynasty. At that time, Liu an is a country name and the tea named from where it was produced. In Ming Dynasty, Liu-an tea was a famous tea to help digestion and the older the tea aged it’s act as a very strong medicine. In “Tea Commentaries-Tea Production Section written in Ming Dynasty says, “Good teas must be produced from famous mountains. The warm weather in the southern part of China is very suitable for tea plantation. It is one of the great mountains of Huoslian.

The only way to prove the approximate time of Liu-an tea’s existence if from the printed text of one of the tickets of aged Liu-an tea 1898 produce by a tea producer Sun Yishun An-tea Hao which have been in the industry at least for over a hundered years.

Liu-an tea is very unique and popular in Anhui province. There were around 20 to 30 family tea produce Liu-an tea in the early to the middle of 20th century. However, the political environment in China was very unstable at that time which caused the tea producer decline. That why during that time the supply of genuine Liu-an tea from Anhui province was very limited in the early 20th century. It had a complex manufacture process and need to stored for several years before it was sold to the open market. This unique storing procedure locked up the cash flow.

Although the supply of Liu-an tea drop during the unstable time, tea fans and tea lovers demanding for the tea. That’s why during that time most of the Liu-an tea was send to the tea shop in Hong Kong and Macau (more stable political environment) most of the very old Liu-an tea can be found. Unfortunately, the descendants did not continue to run their family tea businesses, eventually ceased their businesses in the 1970’s.

Aged Liu-an tea is soft and vivid with its little bitterness. However, the slight bitterness is perfectly enhancing the overall taste of the tea. The brewed tea leaves of aged Liu-an tea are usually soft with a darker reddish colour. All these characteristics make it quite different from Yunnan Pu-er Tea. It’s vivid and bright tea taste gives aged Liu-an tea a very outstanding sensation.

The preliminary manufacturing is performed by tea farmers. First of all, raw tea leaf must be plucked around Guyu “corn rain” (24 solar terms in the mid-April). The raw tea leaf must be fine buds and young tea leaves. After plucking, these tea leaves will then be undergone the process of preparatory fixation by stirfying in the wok. Then,the soften tea leaves will be twisted and rolled on the large bamboo mat on the ground.The next step is to used a very large bamboo basket or cage to roast the wet tea leaves over fire in order to make them dry. The drying process is also divided into preliminary drying and final drying. After finishing all the above procedures, the tea leaves will have shiny appearance. These are the raw dry tea leaf materials (Mao Cha) of Liu-an tea before compression. In the past, the tea farmers sold the raw dry tea leaf to private tea firms to performing the basket compression. Sun Yishun was one of these private tea firms.

The fine manufacturing, will perform in these private tea firms or factories. Firstly, they will classify the raw tea leaves into different grades and then pick out the yellowish old leaves, if any. After obtaining the best fine and young tea leaves, they will roast these tea leaves again. After roasting, these tea leaves have to be exposed outdoor overnight during good weather in order to absorb the natural humidity at night. At dawn, tea factories will put them into buckets for steaming and then compress into little basket with bamboo leaves. However these little basket is not convenient for storage that’s why every 2 little baskets will be packed face to face. All together 6 baskets will be tired up by bamboo stripes which go through each little basket in order to stabilize them. One stack of Liu-an consist of 6 little baskets. Normally come in 250g or 500g per basket. After bundling up, they will put these stacks on shelf in the drying room. There will be charcoal fire under the shelf so that the appropriate temperature is maintained in the drying room. After the Liu-an completely dry, ever 10 stacks will be bundled up again. A bamboo mat will be used to cover them up as the largest stack.

According the the traditional of Liu-an tea, these newly made Liu-an baskets must be store for severl years for aging so s to allow the Liu-an tea to be mwllower. After aging, its dry tea leaves will become dark red with a reddish tea broth. The tea broth color will become more reddish after many years. The thick, mellow and smooth tea broth gives incredible freshness appreciating a sip of aged Liu-an will make one feel good and harmonious.

Keeping and storing aged Liu-an tea is not difficult. Need a place with good ventilation and no direct sun light. Besides, the storing place must be dry and clear from unpleasant odor.